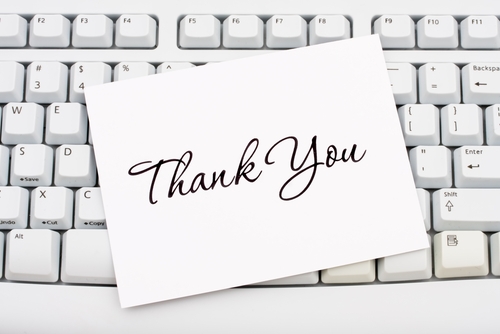 The two words every employee wants to hear

A little appreciation goes a long way. As humans we know this, but a recent project demonstrates more truth in the matter than you might expect, especially in regards to developing a high performing team.

In a series of four experiments, researchers Adam Grant and Francesca Gino added scientific weight to the fact that appreciation shows the helper’s work is valued, needed and accepted. It is this sort of positive reinforcement that encourages people to continue to go above and beyond what is expected of them. Without it, they don’t get the social cues that motivate members to work harder.

Proving the power of gratitude

In the first experiment, research participants were asked to edit a cover letter for a job application. Those that received a grateful rather than neutral email message were twice as likely to help out again (23 to 55 per cent). What’s more is that when a verbal thank you was provided instead of an email, the participants spent an average of 15 per cent more time helping out a second time. Furthermore, receiving appreciative feedback increased the likelihood of assisting others by more than double (32 to 66 per cent).

“When helpers are thanked for their efforts,” said Francis Flynn, reporting for Stanford Business School, “the resulting sense of being socially valued is critical in encouraging them to provide more help in the future.”

“The research affirms our general intuition – that giving thanks can have important implications for encouraging actions that promote cooperation.”

The lost art of workplace appreciation

But giving thanks isn’t happening enough. Research conducted in 2014 by Monster.co.uk found that 58 per cent of UK employees don’t get thanked enough at work, reducing motivation and leading to feelings of under-appreciation.

“Let [employees] know when they have done a good job.”

The strange thing is that 41 per cent of bosses also acknowledged that there is not enough appreciation in the workplace, something organisational behaviour psychologist Corinne Sweet explained.

“We can sometimes feel embarrassed about saying ‘well done’, or giving ‘positive feedback’,” said Ms Sweet, “[but] people feel ‘lifted’ emotionally by their bosses and thus feel good about themselves and perform better.”

“This is a clear call for bosses to be more engaged with their employees and let them know when they’ve done a good job.”

In your pursuit to becoming a more effective leader, start by using the two words that every employee wants to hear more often and really showing that you appreciate your staff. But to refine your skills more holistically, enlist in a training course with the Institute for Communication Management and Leadership today.